It takes years to build a reputation and a

few minutes of hacking to ruin it

The digital age bring us a convenient life, but at the cost of something much more important; security. The threat of cybercrime to businesses is rising fast, McAfee estimates the cost of damages associated with cybercrime stands at $400 billion, up from 250 billion two years ago.

The cost of doing to little

The average cost of a data breach to a larger firm is estimated between $2.2 million to $6.9 million. That’s not counting the damage done to the firm’s reputation and the associated costs of remediation. If a customer’s confidential data is lost, their trust is eroded, and they will conduct their business elsewhere.

As the sophistication of hackers increase, so does the efforts to detect and stop them. The problem is you can only develop an effective defense by first knowing how the attack works, so the hackers are usually one step ahead. The amount of money to be made from a successful data breach is a big driver to find ways around current cyber defenses, it’s big business and the hackers are winning.

Again, it’s meant to bring us a more convenient future, but it’s at the
cost of security. Most IoT-devices have little to no, security and the threat of cybercrime is obvious. As the proliferation of these devices continue to accelerate, so does the cyberattacks utilizing their weak security. In 2018 there were 23 billion IoT-devices connected, growing to 75 billion in 2025.

There is no 100% effective antivirus

Another effective way to circumvent protection is purchasing a zero-day vulnerability. This is a software vulnerability unknown to everyone but a few powerful actors that either uses or sells them. Since this vulnerability is unknown the exploit can go on years until detected and patched (if ever).

Antivirus programs can be incredibly invasive to a user’s system. They forcibly hook themselves into other pieces of software, such as browsers, word processors or even the OS’s kernel, in an attempt to catch viruses. This invasive approach can deal more damage than they attempt to mitigate, opening up new security holes for a hacker to exploit.

Bitidentify SDL uses proactive security rather than reactive, our system is built around never having your data connected to the internet. If a hacker can’t see your data it can’t be stolen or even targeted for attempted hacking, this is proactive security at it’s finest. The threat of cybercrime is minimized.

The core of our system is a bare-bones Linux OS (Host) that in turn uses virtualization technology to run two instances of Windows (Guests) on top of it. The Guests are the Open Machine and the Secure Machine, Open is connected to the internet and Secure is only connected to the local network (LAN). The user works with confidential data on the Secure Machine and switches to the Open Machine when there is need for internet.

Working in this way, the chance of inadvertently infecting your system is minimized. If the user manages to get infected (trough poor handling of the system) it can easily be restored to working condition at the push of a button. 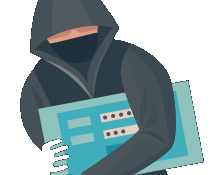 What is a Hacker?